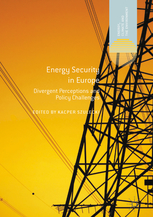 The book, edited by Dr. Kacper Szulecki, is the final output of the project financed by the German-Polish Science Foundation (grant No. 2014-15) lead by Research Centre for East European Studies at the University of Bremen, with ESPRi’s participation.

This edited collection highlights the different meanings that have been attached to the notion of energy security and how it is taken to refer to different objects. Official policy definitions of energy security are broadly similar across countries and emphasize the reliability and affordability of access to sufficient energy resources for a community to uphold its normal economic and social functions. However, perceptions of energy security vary between states causing different actions to be taken, both in international relations and in domestic politics.

Energy Security in Europe moves the policy debates on energy security beyond a consideration of its seemingly objective nature. It also provides a series of contributions that shed light on the conditions under which similar material factors are met with very different energy security policies and divergent discourses across Europe. Furthermore, it problematizes established notions prevalent in energy security studies, such as whether energy security is ‘geopolitical’, and an element of high politics, or purely ‘economic’, and should be left for the markets to regulate.

This book will be of particular relevance to students and academics in the fields of energy studies and political science seeking to understand the divergence in perspectives and understandings of energy security challenges between EU member states and in multilateral relationships between the EU as a whole.