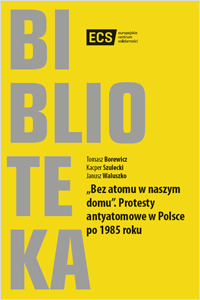 The late 1980s were the heyday of Poland’s environmental protest movement. A new monograph co-authored by the late Tomasz Borewicz, Janusz Waluszko (both leaders of the 1980s protests) and ESPRi’s Kacper Szulecki, gathers archival material and rich oral history of the movement which shook Communist Poland.

This empirically rich monograph shows how the Chernobyl catastrophe sparked a new kind of protest against the communist authorities in Poland. The authors, drawing on samizdat, archival sources and open-ended interviews with participants, show how the apparent apolitical nature of environmentalism, the broad resonance of public health issues among Polish citizens, the popularity of anti-nuclear slogans and new forms of protests, created this qualitatively new phenomenon on the opposition scene. The story of anti-nuclear protest, culminating only after the regime transition in 1990, challenges the dominant narrative of the Cold War’s end, presenting 1989 as a watershed date.

The book is forthcoming in April with the European Solidarity Center’s academic publishing house. An English edition is under contract with Berghahn Books, scheduled for late 2020.