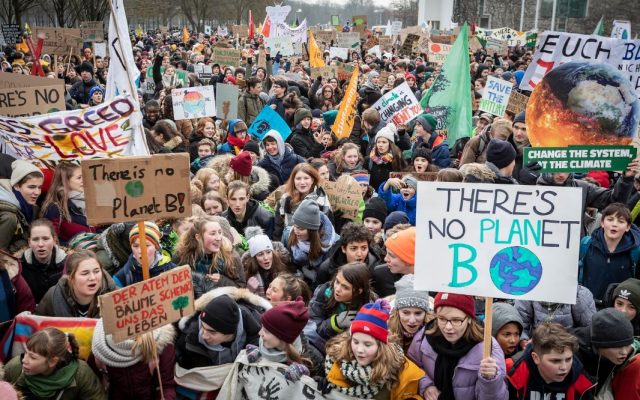 The Von der Leyen Commission displays unprecedented environmental policy ambitions and appears to be the greenest in EU history. However, it is also facing challenges of overwhelming magnitude, and it will work under societal pressure unseen in this policy area. Can its flagship European Green Deal deliver?

The Von der Leyen Commission displays unprecedented environmental policy ambitions and appears to be the greenest in EU history. However, it is also facing challenges of overwhelming magnitude, and it will work under societal pressure unseen in this policy area. Can its flagship European Green Deal deliver?

Environmental issues, and most importantly the increasingly evident climate crisis, have recently begun to leave a very distinguishable mark on European politics. The years 2018-2019 saw a number of electoral successes of Green political parties and liberal forces with strong environmental agendas (also in the European Parliament), and a wave of mass protests related to climate change (e.g. Greta Thunberg-inspired school strikes, Extinction Rebellion). It therefore came as no surprise that the incoming head of the European Commission Ursula von der Leyen took up environmental concerns as one of her team’s top priorities.

“The European Green Deal” communication (henceforth EGD), published on 11 December 2019, goes far beyond the usual lip service that previous Commissions paid to environmental and climate challenges. The communication is visibly inspired by the US “Green New Deal” idea, but due to the fact that it is far more concrete and developed in an already more sustainability-friendly polity, it raises hopes for a political breakthrough. It is quite clear that Von der Leyen is opening a whole new chapter and the ambition and breadth of the initial communication is striking.

To anyone following environmental and climate policy in Europe for a longer while, the EGD communication reads like a sustainability scholar’s and environmental NGO’s wish list. It ticks all the important boxes – starting out from a very strong emphasis on climate change mitigation and adaptation, through building a circular, ‘green’, and ‘blue’ economy, to care for biodiversity, forests, and food security. Taken together, the EGD constitutes “an integral part” of this Commission’s strategy to implement the UN 2030 Agenda and the Sustainable Development Goals.

The realization that environmental policy is not only about climate is important, as for years experts have been warning that a climate-only logic can have negative effects on other dimensions of sustainability – social as well as environmental.

All this is presented with equal attention to questions of industrial policy, economic affordability, social inclusion and justice. Mainstreaming of sustainability in all EU policies – which will be a key issue for the Commission to oversee – has not only received a separate section, but a promised concrete budget target of 25%.

And yes, tradeoffs between all these grand goals are acknowledged, as is Europe’s role as a global sustainability champion and its limitations.

Apart from being comprehensive, EGD is also extremely ambitious. While we shall have to wait for a carbon free Europe until 2050, the 24-page document proposes as many as 16 strategies, plans and operational frameworks that it wants to produce in 2020, eight of which are to be expected in the first half of the year already. This comes on top of the plans that the Commission will prepare for the 2020 EU-China and EU-Africa summits, as well as the Glasgow UNFCCC conference and the Kunming Biodiversity Conference. This ambition and urgency is most welcome, not least by Brussels-based coffee and energy drink vendors.

The knowledge is out there – but we need much more

However, the time and human resources that the new vice-president for the European Green Deal, Frans Timmermans has at his disposal will not be the only problems in translating this grand vision into policy and eventually – an environmental transition Europe desperately needs. The tradeoffs between EGD’s different dimensions and goals are significant. They will require great attention, while policy outcomes and feedback that we cannot yet anticipate will further affect the EU’s performance in the future.

Many of the ideas presented in the EGD are not new; some have been on the table for over a decade. Nonetheless, it is encouraging to see the Commission upgrading them to top priority e.g. the expansion of the Emissions Trading System (ETS) or turning the European Investment Bank into EU’s core climate finance institution. Also, mainstreaming climate policy into EU’s trade policy has been discussed for long and it is great to see the Commission’s commitment in this area, with the possibility of addressing carbon leakage through a carbon border adjustment, opening the possibility for finally including consumption in emissions trading.

The massive research and innovation necessary to make all this happen will be mobilized by an unprecedented commitment from the Horizon Europe programme, which is to see as much as 35% of the funding going to climate and sustainability transition research. This is a game changer.

A recent study has estimated that between 1990 and 2018, less than 4.59% of the funding was spent on climate-related research, and only 0.12% on the social science research into the feasibility and impact of the necessary transitions. This is extremely unfortunate, since the main challenges of the climate crisis are political and social. We very well know that the climate is changing and we know why. We also have very clear ideas about how to mitigate dangerous climate change. What we do not know is how to get everyone on board.

A long and bumpy road ahead

What can possibly go wrong? Well, a lot. Although the EGD is a very inspiring and very welcome vision, there are still many obstacles and potential challenges, even if the VdL Commission maintains its ambition and environmental focus. The most important challenges will be political feasibility and social acceptance, especially for the difficult, deep and costly energy transition. All this in an increasingly polarized Europe, where climate sceptics still abound, while pro-climate activism is less apologetic and patient by the day.

The biggest obstacle will be resistance from Member States governments, playing a different political game. Even though the Energy Union’s governance mechanismis trying to square that circle, the most important tension of European energy policy still remains: we are setting EU-wide goals and targets (like carbon neutrality by 2050), but the policies and resources are under sovereign national oversight – a problem which we signaled already at the 2013 Dahrendorf Symposium.

The EGD suggests the Commission’s ambition to further expand its power, using all instruments that have already been at its disposal (e.g. agenda setting, targets, the European Semester mechanism, State Aid Guidelines etc.). However, even with these, achieving “zero tolerance for non-compliance or weak implementation”, which World Wide Fund for Nature (WWF) listed as one of the five points to make a Green Deal credible – will be difficult. Much is to be expected from the novel Climate Law, but even more from the Commission brokering political support for the EGD among EU citizens to pressure governments from two sides.

A key challenge: leave no one behind

Importantly, EGD puts great emphasis on questions of justice, access and inclusivity of Europe’s transition, seeking to “leave no one behind”, and achieve a “just transition”. This will be fundamental, not least for manufacturing consent for the necessary changes: new renewable energy infrastructure, smart grids, demand side responses, transmission lines, changes in energy use practices and consumption patterns etc. It will also be fundamental for the most difficult merger the EGD seeks to achieve: addressing the environmental and the economic crises at the same time.

All this will take place in the shadow of yet another ongoing crisis – that of political legitimacy and liberal democratic institutions under pressure from populist challengers. Populism, particularly right wing, has been identified as a potential threat to climate action.

Empirical evidence we recently gathered from six countries in which populist parties are in government and/or in opposition shows that this might not necessarily be true. Populism plays a dual role – while it can be a threat to particular climate policies in certain contexts, it can also be an important reality-check, pushing political elites to reconsider the instruments, fairness and inclusiveness of their climate and environmental policy strategies. That is the lesson learned from the “yellow vests” movement in France, or Norway’s recent mass protests against new road tolls in cities.

A just transition – from the bottom up

An example is the current rise of the “just transition” idea, which can be partly attributed to populist forces – to which it either responds or which put it on their banners. As a policy idea, “just transition” had been around for at least a decade. However, it was put on top of climate policy agendas by the Polish right-populist government’s COP19 presidency with the Katowice Just Transition Declaration, and now the Commission’s EGD, which envisages as Just Transition Mechanism and a Just Transition Fund, partly in response to societal concerns articulated by populist politicians.

Mobilizing significant structural funds for sustainability and energy transitions has also been something we discussed at the Dahrendorf Symposium, which explored the ways to get on board those Member States that express the starkest opposition to ambitious climate action due to socio-economic constraints. And while financial assistance for decarbonization is important, and appears to be the core stake in Poland’s December 2020 opt-out from the 2050 net-zero emission target, a two-speed decarbonization approach will leave Central and Eastern European states sidelined and will not allow them to reap the benefits of a clean energy transition in the long run, an E3G analysis warns.

The Commission will have to strive for a broad political consensus on the feasibility of decarbonization, and perhaps an effective way will be a bottom-up oriented “just transition”, emphasizing not only financial transfers between Member States, but closer engagement with local governments and citizens, building societal acceptance on the ground.

Climate change awareness is on the rise across Europe, as recent Eurobarometer surveys show, and this is also true for countries whose governments are skeptical of ambitious climate action. But to get the needed impetus, financing ought to be combined with firm and consistent emphasis on mainstreaming energy justice principles, evaluating all policies and programmes on their fairness and social inclusion outcomes.

The VdL Commission has a vision, but translating it into an effective policy mix for achieving a Europe-wide sustainability transition will be an enormous effort. An effort that is unusual, but the intensity of climate action protest – which will only grow, as we run out of time to act – will no longer make “politics-as-usual” a viable option.