While political environmentalism played an important role in social mobilization against communist regimes in Central and Eastern Europe before 1989, throughout the 1990s and early 2000s conservationism appeared to be in decline across the region, and external pressure from European institutions and Western donors influenced environmental policy. What explains the effectiveness of protest since the environmental movement emerged in the 1980s? We trace the emergence and evolution of Polish political environmentalism, looking at three levels of the environmental movement’s legitimacy: the level of practices, societal support, and discourse. Each phase identified between 1980s and 2017 saw shifts on different levels of legitimacy, and each ended with a spectacular environmental protest or a decision, bearing implications for the following phase. Since 2010, we see a deep polarization of Polish politics, limiting the effectiveness of environmental protest despite the movement’s regained triple legitimacy in large parts of the society. 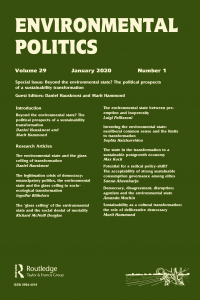 Between domestic politics and ecological crises: (De)legitimization of Polish environmentalism